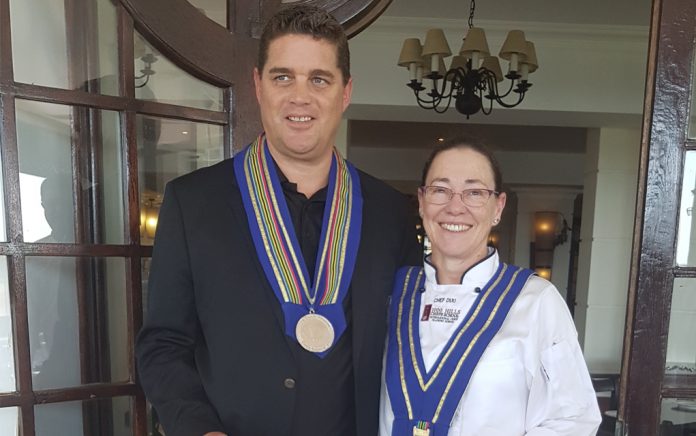 Sharmaine Dixon is a chef, lecturer and entrepreneur who has invested her life in the hospitality industry, either through launching and running successful restaurants, or teaching the chefs of the future as a lecturer and course developer.

While she has put her enviable culinary skills to good use in various restaurants of her own, it’s Sharmaine’s love of teaching that positioned her perfectly to win the 2017 South African Chefs Association President’s Award.

Having started lecturing at the Pinetown Technikon in 1982 while completing her own studies, Sharmaine has also taught at M.L. Sultan Technikon, The Hotel School, and was principal of the Chantecler Hotel School of Food and Wine. She launched the 1000 Hills Chefs School in 2005, offering City & Guilds qualifications in Food Preparation and Culinary Arts, and expanded the school to include a micro-brewery and production areas for cheese, charcuterie and confectionary.

Her students have gone on to win multiple awards, with her programme being sponsored by the Department of Tourism to offer training to 800 students across the country. She has sold the 1000 Hills Chef School, but continues to consult to its new owners.

Her qualifications and awards include a National Higher Diploma in Education; a Master’s Degree in Technology: Food and Beverage Management. She is an accredited Level 5 Assessor for Food Preparation and Culinary Arts, and helped develop the Professional Cookery Programme that has been used by South African government-owned tertiary institutions since 2004.

She has been a runner up in the South African Senior Chef of the Year competition three times, and was the only female runner up in the 2011 By Invitation Only competition. She continues to consult with organisations to refine their menus and staff skills, and is deeply involved with multiple initiatives to stimulate the growth and development of hospitality and tourism in South Africa.

She has been a committee member of the South African Chefs Association for 15 years, and supports a wide range of charity and community-improvement projects and organisations in the areas surrounding the 1000 Hills Chef School.